The date was 21st July 1990 only months after they had announced that the Berlin Wall was to be brought down, and I was in Berlin and truly in my element, surrounded by the aftermath of the fall of the Wall.

I was a young 20 year-old photographer from Cirencester, Gloucestershire and I was in the early stages of my photography career.  I was having my first real foreign adventure and with my trusty Nikon FM2 I was eager to capture the atmosphere and document this historic occasion myself. I had seen all the news reports and newspaper stories months earlier and it was now my turn to witness it too first hand.

I had travelled over with some friends to attend the Roger Waters ‘The Wall’ concert which had been organised to commemorate this historic achievement and while I was there I was determined to take as much of it in as I could. It was such an amazing news story and I remember there being people from all over the world there, all wanting to take in the scenes for themselves. 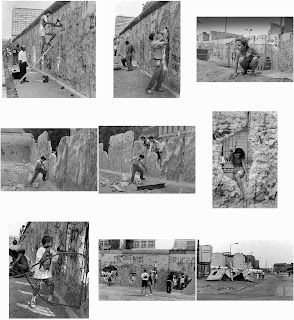 Everywhere I looked there were men, women and children breaking up pieces of the wall.  Some seeking out their own little memento from their trip and others clearly doing it more for commercial reasons, selling pieces of the wall and other artefacts to the ever increasing amount of tourists flocking into the city. 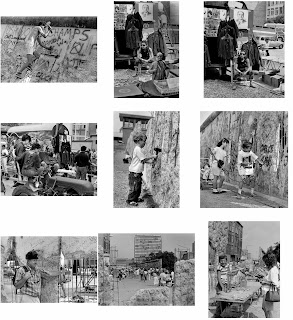 The Berlin Wall was built in 1961 by the East German communist government to prevent its fellow citizens from fleeing the country. The amount of East Germans leaving for the economic prosperity and political freedom of the west was continually escalating and was in turn undermining the government.

The Berlin Wall consisted mainly of concrete with electric fences, vehicle barriers and an area called the "death strip" which was patrolled by the border guards - this is the area in which most of my photos were taken.

The Berlin Wall divided Berlin right down the middle and sadly split up family and friends. It became a symbol of totalitarianism around the world. It remained for 28 years until its demise in Nov 1989. It was headline news around the world and former Pink Floyd singer and bassist Roger Waters decided to celebrate the occasion by organising ‘The Wall’ concert right in the heart of Berlin itself.

The concert was staged on the vacant land between Potsdamer Platz and the famous Brandenburg Gate, a location that was part of the former "no-man's land" of the Berlin Wall. The show had an original sell-out crowd of over 350,000 spectators, but shortly before the beginning of the performance the gates had been opened to allow another 100,000 people in to watch.

Twenty five years on and to mark the anniversary of the fall of the Wall, I decided to dig out my old negatives and copy them so I could share them with others. I’ve been a press photographer for more than 25 years now and after digging the negatives out and editing the scanned images, I noticed that one of the buildings in the some of the photos is the Axel Springer head office - I realised that years after taking the photos I had in fact sold many photos to the Axel Springer group, who are a major publishing company in Germany. 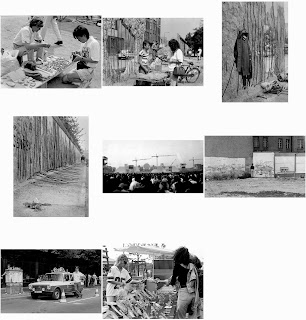 The photos you see have never been published before and so are until now unseen images.

I now live in Scarborough, North Yorkshire with my wife and two sons. And I will never forget my trip to Berlin that year.