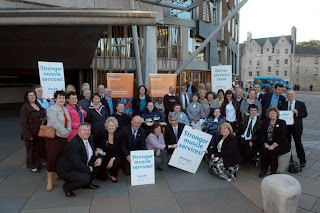 In September I was commissioned by the Muscular Dystrophy Campaign to Document their recent trip to the Scottish Parliament in Edinburgh.

Pictured: Families and MSPs at Scottish Lobby in September 2009

Deputy First Minister, Nicola Sturgeon MSP, yesterday evening pledged that people with muscle disease in Scotland will receive the care support that they need after announcing a thorough review of neuromuscular services.

Campaigners had called for an urgent review of health and social care services.

The Muscular Dystrophy Campaign's Building on the Foundations in Scotland report revealed that the 5,500 adults and children living with muscle disease in Scotland face a ‘postcode lottery' of specialist services.

The announcement of a review was made as families and supporters gathered at a lobby yesterday at the Scottish Parliament in Edinburgh. One of the crucial issues raised was the fact that there are currently only two part-time Muscular Dystrophy Care Advisors (RCAs), which is inadequate to care for the 5,500 people with muscular dystrophy in Scotland. The Regional Care Advisor posts are a vital resource for coordinating services and providing support, especially during the transition to adulthood. 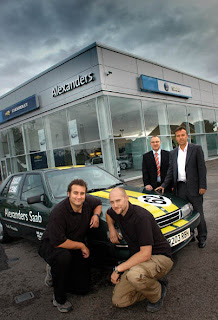 I was commissioned by a PR Company recently to do some pictures for SAAB one of their clients.

A local team of adventure rally drivers has completed one of Europe's toughest driving challenges, raising money for charity in the process, with the help of car dealership Alexanders Saab York.

The team, comprising drivers Neil Gulliver and Mark Dennis, competed in the 2009 Barcelona Bangers rally - an event which saw 50 teams gather in Calais on 10th September before embarking on a three-day cross country journey to Barcelona, travelling in a car purchased for less than £200.

In order to successfully complete the rally, each team had to drive this vehicle over the 920 mile route - during which they crossed the French Alps - to the finishing line, completing several challenges along the way.

The team selected a classic Saab 9000 to transport them across Europe, which they purchased for just £10. Local dealership Alexanders Saab York then checked to ensure the car was roadworthy and also made a generous contribution towards the cost of the team's fuel, allowing the team to complete the rally and raise money for their chosen charity - Macmillan Cancer Support.